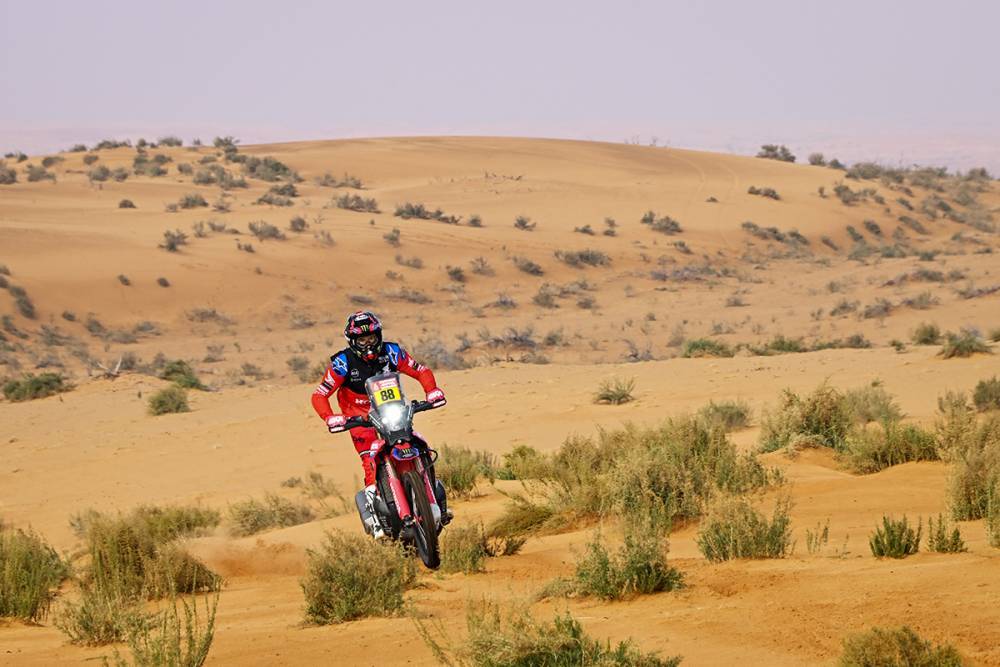 Today’s stage was a 707km stretch from Al Qaisumah to Riyadh with the longest special of the rally, 465km.

Stage 3 winner Joaquim Rodrigues opened the stage and he felt the weight of scouting the pack especially when Toby Price was hot in his tail. The Portuguese lost nearly half an hour and came to finish line with P35 for the day.

Opening a stage becoming unpopular every other day and some admitted that they are trying not to win a stage. The strategy is always important but seeing the each stage winner gets hammered the next day is just painful. 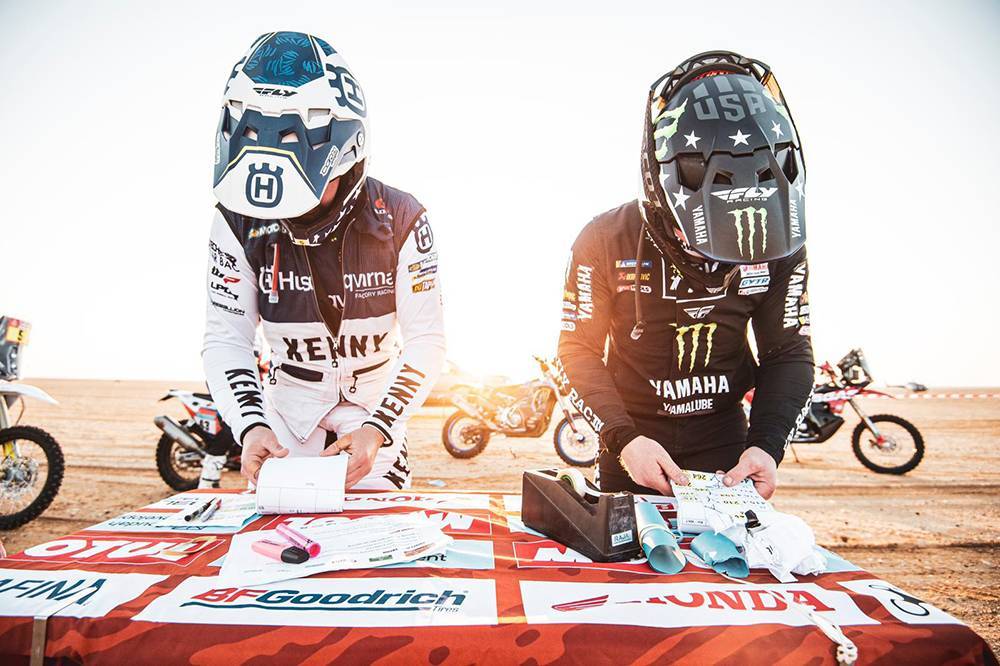 The pace of the day went back and forth but it was all about Joan Barreda Bort after the halfway point. The Spaniard took the control and dominated yet another Dakar Stage. He got his 29th Stage win and just 4 stage wins far from tying the most stage wins record. Dakar legends Stephane Peterhansel and Cyril Despres mutually holds the most stage wins reckord, 33 wins.

JBB was followed by his team mate Pablo Quintanilla, who came in 3’37” behind and claimed P2.

The other outstanding performance of the day came from Sherco TVS Racing and their top guns. Rui Goncalves and Lorenzo Santonillo completed the day’s special with P3 and 4. They got a solid team play strategy for tomorrow and Lorenzo would end up climbing the general classification ladder further. He currently sits in P5.

Leader of the general standings did not changed and Sam Sunderland even managed to stretch his lead. The only change in the top 3 is that Matthias Walkner and Adrien Van Beveren switched the places, Walkner P3 and Van Beveren P3.

Pablo Quintanilla “Fourth day in the books! We have pushed all day and we passed the longest stage of the rally in a very good way with a 2nd place. Almost 470 km of special rapids with a mix of terrain between hard ground, dunes and stones. Happy with how the day went and with the feeling on the bike.”

Sam Sunderland “The desert will always be your biggest competition, ROUGH DAY! Km 200 I hit my disk on a rock and bent it so was was without a rear brake (seems to be a habit of mine) then at km 300 while searching for a waypoint in the rocks I was looking down to check the GPS and hit a big rock and had a barely dingle right out the front door and gave my head and shoulder a good whack the rest of the stage (160km) was survival mode with no rear brake and lack off focus made for some character building. Still leading the overall which is a nice positive after day like that! We will try to learn from it and look forward to tomorrow! 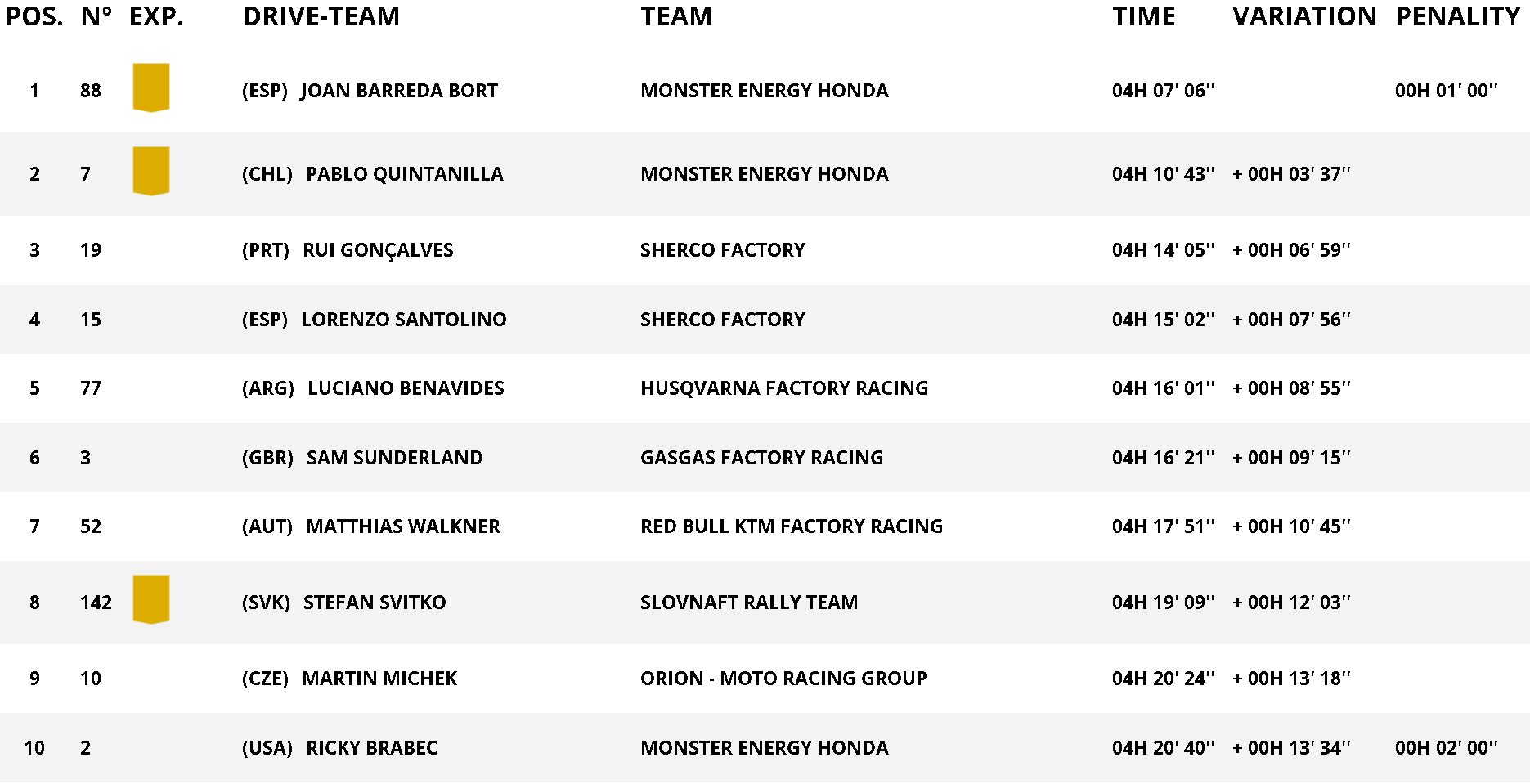 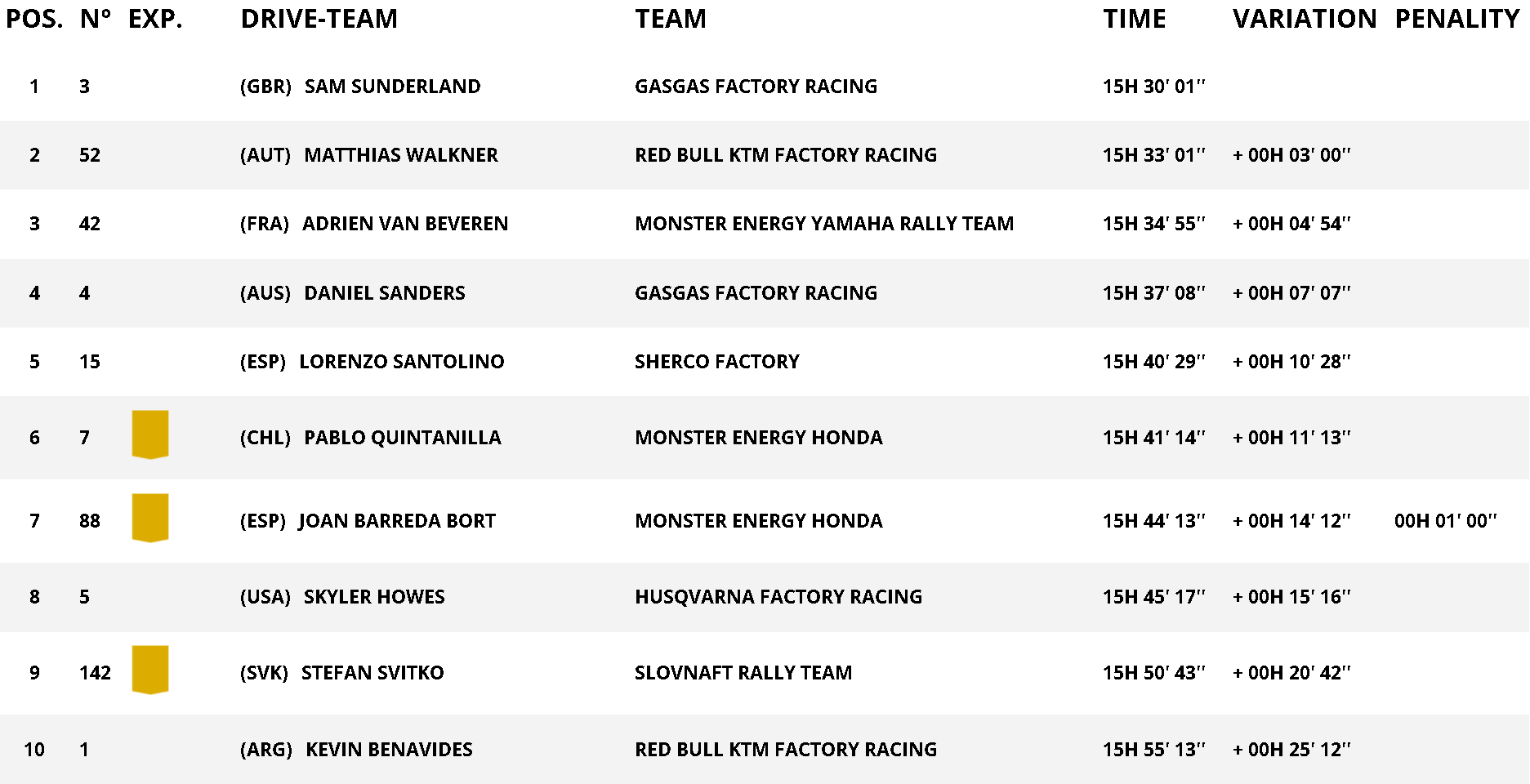