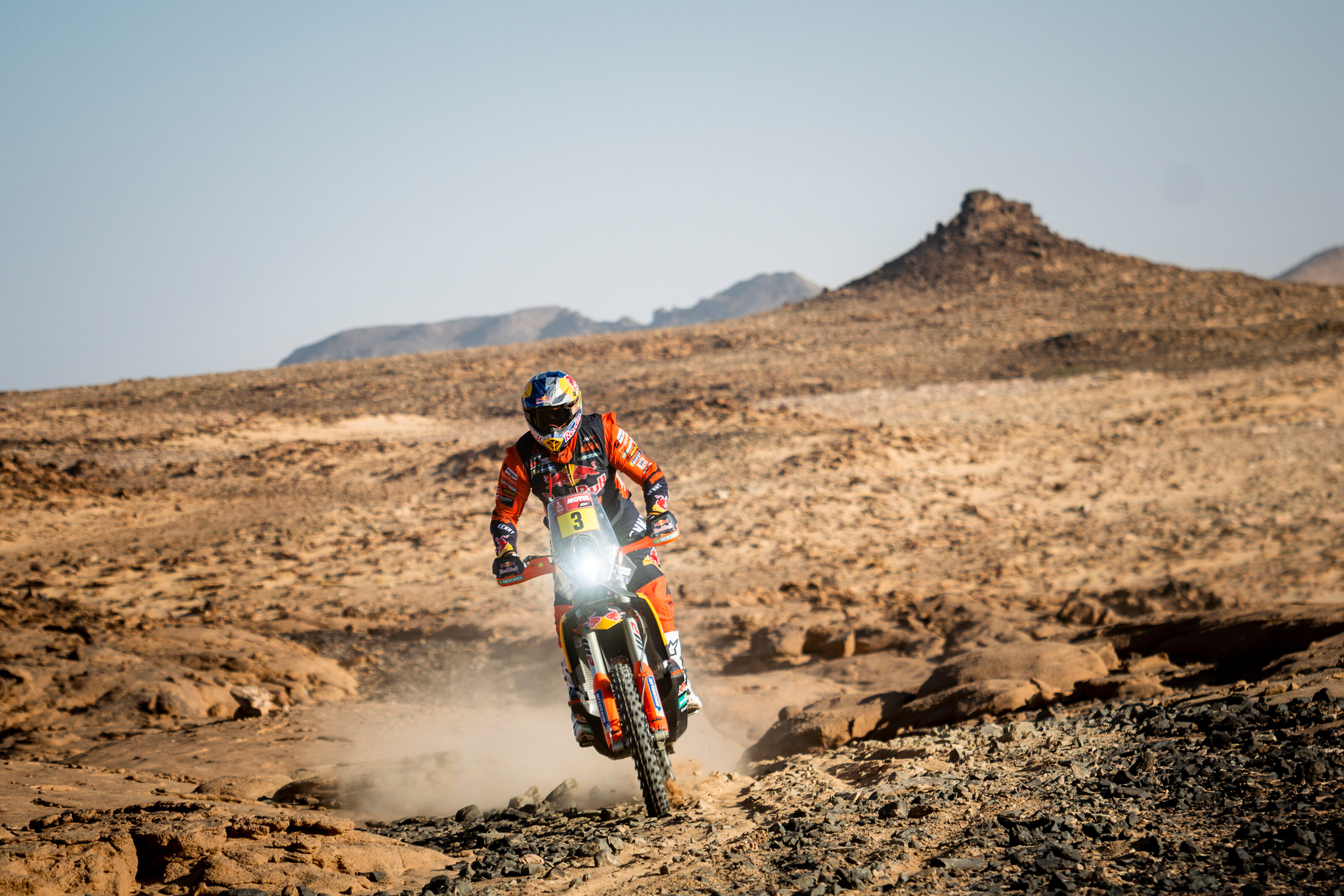 Stage 3 was a 629 KM loop trail from Wadi Ad-Dawasir, 403 KM of which was competitive stage.

Joan Barreda opened the special for the day followed by his team mate Ricky Brabec. Two Honda’s struggled along the way and lost substantial minutes against their rivals. Barreda felt 24’49” behind the stage winner and completed the day with P30. He is now P8 in general classification. Ricky Brabec was no different and he finished the day with P25, 21’39” behind the stage winner. Reigning champion sits in P13 in general classification.

The stage witnessed a great competition between Kevin Benavides and Toby Price. Honda rider Benavides hold the lead from start to midway point but the difference was never over a minute. Price kept his pace without doing any mistakes and took the lead over in the last sectors. Aussie came in P1 for the day with 3H33’23” and repaired some damage left from yesterday. He is now holding P3 in general. Kevin Benavides finished with P2 3’16” behind Aussie (2 minutes penalty).

Matthias Walkner completed the top three with only 4’36”(2 minutes penalty) behind.

BAS DAKAR KTM rider Skyler Howes was the one who finished the day with P4 but more to that he got the general classification lead as a result. He finished the past three stages with P8, P11 and P4.

A short video from the day. Spoiler alert; There is no jump!

Toby Price “It’s like a yo-yo effect at the moment. It’s quite frustrating to be at the front then right at the back, the navigation side of things makes it difficult to lead a stage out. I have to do it again tomorrow but hopefully I might catch a break and it isn’t too hard! Still a long way to go but to have no crashes and have the bike in one piece at the finish today is great!”

Kevin Benavides “I pushed a lot, I felt very calm and comfortable with the bike. I was leading most of the stage although at the end I had a small loss, but in general very well. This Dakar is being a little crazy, with ups and downs, it varies a lot from day to day but it is what keeps me motivated and at a certain point I like that it is difficult and complicated.”

Skyler Howes “It was a good day today! Found the flow early on in the dunes and when things opened up, I felt right at home. The sandy tracks through the canyons and the rocky passes were really fun and I was just having a good time! Caught up to a handful of guys in front of me and had an all-out battle to the finish! Honestly, I’m just having a lot of fun and I’m feeling comfortable on the bike. I’ll take every day as it comes and tackle each challenge as best as I can. After all, just a dude from Utah riding a dirt bike in Saudi Arabia, gotta have fun with it!”

Ricky Brabec “Another fast day up front with the boys. This week has been one for the books, a wild one so far with the rubber band effect going on between all competitors.”

A brief on board footage of Arunas Gelazninkas (LTU) riding dunes;

HONDA STAGED A STRONG COMEBACK WHILE KTM SUFFERED THE DAY