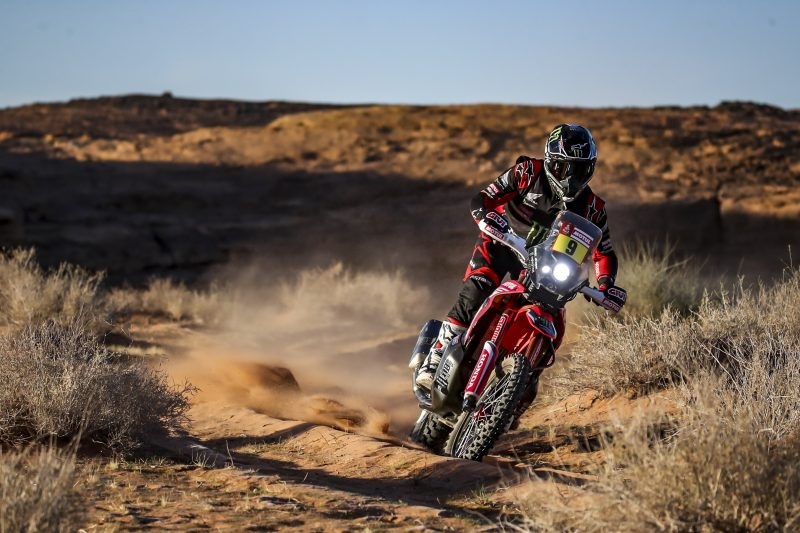 Stage 5 winner Toby Price started to day first and it came with a price. This years edition had this stage leading challenge for everybody and it was Toby’s turn today. This would end with an acceptable loss with but defending champion grounded to a halt where he was 425 km into the specials due to a wheel problem. He came in P11 for the day with 16 minutes behind the stage leader. He dropped to P3 in the general standings.

It was all about Ricky Brabec today. The American had an absolute brilliant day and had some fun during his ride through dunes of Saudi Arabia. He finished the day on top by 01′ 34” before his teammate Joan Barreda. It was KTM’s Matthias Walkner who completed the top 3 for the day. He came in P3 by trailing 02′ 45” from the stage winner.

As we are marking the half way of the Dakar 2020 Brabec is leading the general standings nearly 21 minutes.

We are heading into a day of and the rally will resume on Sunday for stage 7.

Ricky Brabec “We made it to rest day, goal number 1. Goal number 2, make it to the finish. Had some fun today during the 477km special riding along side Andrew Short, who absolutely rips the dunes, until around km 428 where he had pulled over to help Toby Price… Dakar is tough and with 6 days left we have to keep the focus”

Toby Price “ Today’s stage started out really good, we were navigating really well from the front and was only losing small amounts of time on the riders who started behind me. I was quite happy with the way I was racing, but unfortunately around the 400km mark my rear tyre fell off! I have no idea why this would have happened but I’m super grateful that Andrew Short pulled up and gave me his wheel which allowed me to get to the finish as quick as possible. Thank you again for this Andrew! Overall I’m pretty gutted that this is how we finished up today but I guess that’s just how it goes sometimes!”