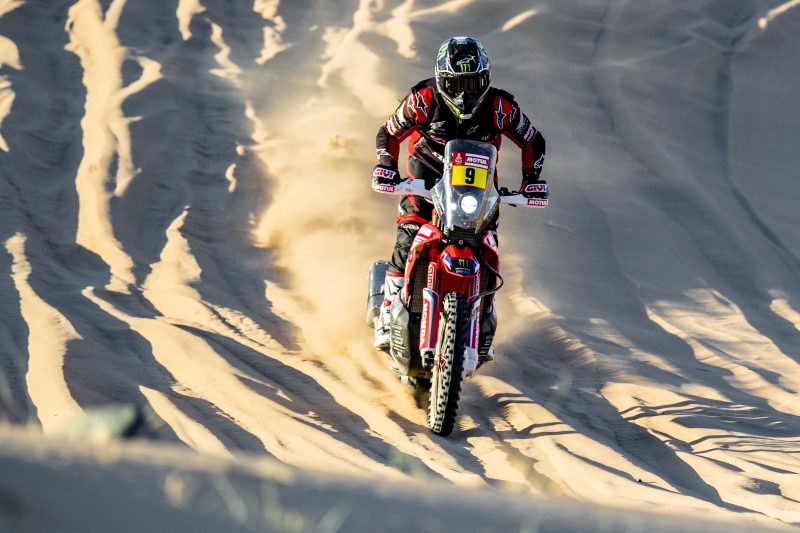 Day 3’s loop stage was a 504 KM tricky route, 427 KM of which was competitive, through Neom’s rough terrain.

Stage 2 winner Ross Branch was first to start to the day and he was under a lot of pressure. Considering this is his second Dakar appearance and first time to lead a stage, he had an impeccable start. After 88 KM he made a mistake and hit his rear tire to a rock. He then quoted “I had a bit of bad luck and fell after 88 km. I took a bend a little too wide and there was a rock which I hit with my back wheel. It threw me off the bike and I’m feeling a little battered, but that’s just the race, I suppose. I’m just trying to finish the stage now”. He finished the day 1h30m behind the stage winner.

Overall classification leader Sam Sunderland had a really slow day and felt 17 minutes behind the new rally leader in general classification. The only positive thing was leaving the stage behind without any massive mechanical or health problem for the Brit.

Ricky Brabec of Monster Energy Honda could not ask for more from a racing day. He stormed from start to the end of stage without any problem and gained nearly 10 minutes against his rivals in general classification. Brabec led the day by 6 minutes clear from his teammate Ignacio Cornejo who came in P2 for the day.

Team Honda stole the stage with a stunning top 3 finish and conquered the general classification by getting 4 riders in the top 5. No doubt that will spice the things for the upcoming stages.

Yamaha rider Adrien Van Beveren had a massive crash at the very start of the stages special which forced him to retire. The french did not lose his conscious but attended by the medical team to biouvac by helicopter. Initial examinations showed that he has a fractured collar bone and bruised hip. He was taken to the King Khalid Hospital in Tabuk for further examination and medical care.

After the stage ended there has been an argument between riders and stewards about a way-point. To Ignacio Cornejo it was a probable GPS problem. He quoted “We had two refueling Today. Until the second refueling, while there was some tricky navigation, I didn’t make any mistakes. I was riding very well and it was good with the times. But at the end there was one way-point that wasn’t where it should have been or they didn’t load it on the GPS. I’m not sure what happened but about ten riders got together, went everywhere and didn’t find the way-point. They said the images on the road-book were perfect, so we carried on ahead but the way point wasn’t there, but then we found the next way-point no problem. For sure it was a mistake but I don’t know what they are going to do. If the times are going to be the same as the ones recorded when we arrived here, or stop the stage at one point before that, I don’t know… I think that would be the fairest thing to do, but we’ll see what they decide”.

Race control investigated the situation and then made a decision of modifying the day’s results. The announcement they made was “Due to a technical problem that affected the GPS of the bikers, the race stewards have decided to modify the results recorded at the finishing line of the special. The results for the stage will be established using the times achieved at way-point 53, after 389 km of the initially planned route”.

Ricky Brabec “Another day in books with fast tracks, rocks, with some sand and epic scenery to go along with all the greatness. Nice day, let’s keep the wheels rolling with 9 days left.”

Sam Sunderland “Difficult stage today with some navigation issues. Waiting for final result confirmation. Excited to start a new day Tomorrow with the stage 4 and some different terrain. It is still early and there is a lot of racing left before we see the finish line!”