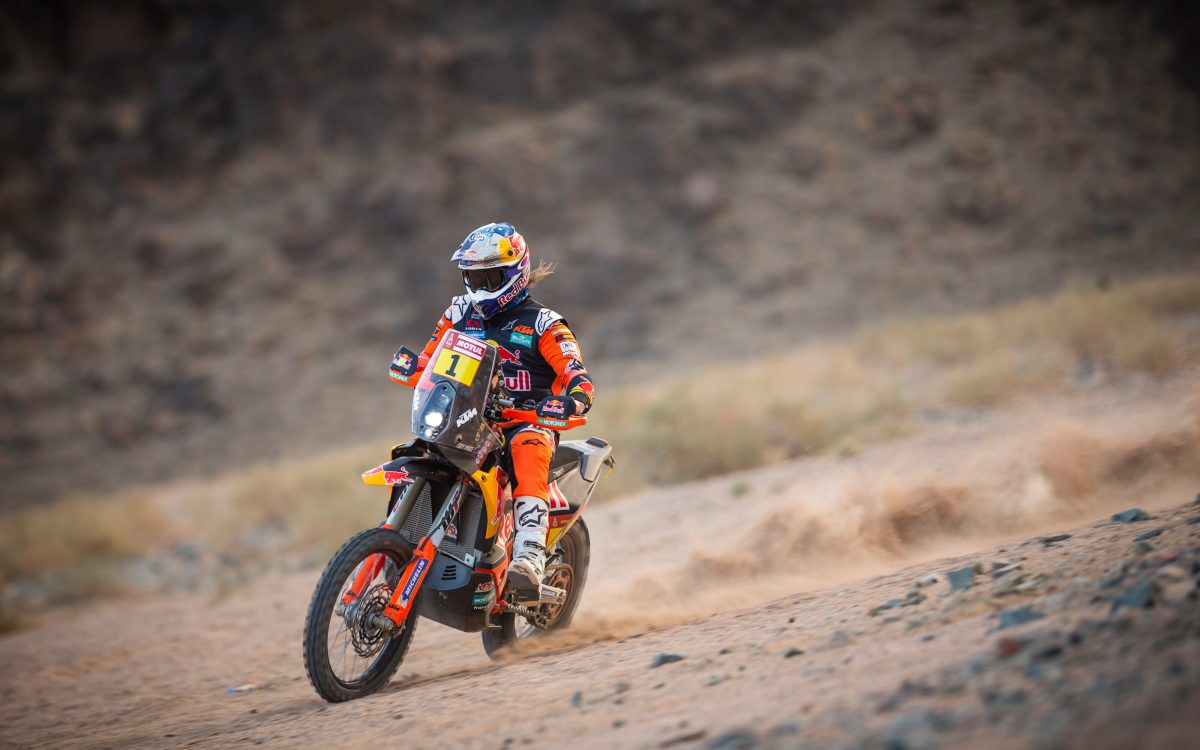 Stage 4 winner Ignacio Cornejo was up for a difficult task today as he was leading a stage opening for the first time. It was expected that his rivals could catch him quick and they did so. After 100 KM into the specials he was trailing the stage leader by some 5 minutes. When he reached to the neutralized zone he quoted “I feel good. The first part was tricky so I decided to concentrate on navigation. I’ve done a good job, even if some of my rivals have gained time on me. It’s not bad for somebody who is opening the way on a special for the first time. But there are still 220 km left, so I’ll have to remain focused”.

The shocking drama of the day came when Sam Sunderland was 187 KM into the special. The Englishman suffered a severe fall and had to retire from the rally. He has injured his back and left shoulder and taken to the hospital for further examinations. It turned out that he has 5 broken vertebrae and a shoulder blade but no surgery required at this point.

Toby Price had a great day and won his second stage of the rally. His P1 performance for the day carried him up to 2nd in general classification. Aussie was followed by two Husqvarnas. Pablo Quintanilla came in P2 and Andrew Short P3.

General classification leader Ricky Brabec had a silent but focused day and came in P4 with 03′ 03” clear from the stage winner. He is still leading the general.

Sam Sunderland “The pain of a crash is nothing compared to the pain of disappointment, unfortunately my race is over after a crash today at kilometre 180. While fighting for the stage win and feeling like everything was under control, I caught a camel grass mound awkwardly putting the bike sideways into the next one and a few later I have 5 broken vertebrae and a shoulder blade! luckily no surgery is required and should be right again soon! I want to thank my team for building me the best bike I could ever wish for and for everyone around who help out during the good and the bad moments. Good luck to my team mates for the rest of the race, put an orange one on the top step! Thank you all for your words of support during the race they help a lot! Also I want to thank Johnny Aubert for stopping to help me when I was crashed.”

Ricky Brabec “Another cold start to the day, but overall was a good one. Starting to get into the sandier side of this beautiful country and today was spent with some more teammates Kevin Benavides, Ignacio Cornejo and along side us the legend with a mullet Toby Price… Hope for some great days ahead”

Toby Price “ I pushed hard at the start, made some good navigational calls and by then I caught up with the Honda boys. It’s been a good stage, it’s actually the first time I’ve ridden with a big group, so it was quite enjoyable, but at the end of the day we are competitive and need to stay in front of them! We’re happy with the day and we’ll see how day six goes now…”